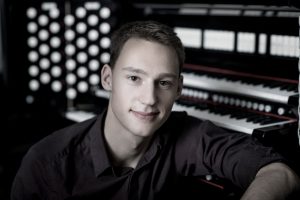 Lukas Hasler (born 1996) studied organ at the University of Music and Performing Arts, Graz, Austria with Ulrich Walther, where he graduated with distinction. In 2020 he spent a year abroad at the Académie Supérieure de Musique de Strasbourg in France under the tutelage of Johann Vexo. Further stays abroad also took him to New York City. Lukas completed his studies in cultural and media management at the University of Hamburg, Germany, where he finished in 2019 with a Master’s degree. In addition to his participation in the opening ceremony of the Salzburg Festival, he has for instance also performed at the Tyrolean Festival Erl, organ summer at the Saint Florian Bruckner Organ, at the International Organ Festival in Düsseldorf (IDO) as well as at the Russian music festival of the Volgograd Philharmonic. He has a thriving international concert career, which has already taken him to Europe and Asia as well as to some of the largest cathedrals in the United States. In 2022, he was the first classical musician to perform in Ukraine after the start of the war and played two benefit concerts in the Lviv Concert Hall for the victims of the war. Lukas won the “Prima la Musica” music competition for organ twice and in 2019 the “Grand Prix” at the International Organ Competition in Malta. In 2014 he also won the “Bärenreiter-Special” prize for his interpretation of a work by J.S. Bach. A year later, “Jugend komponiert”, a competition for young composers, named Lukas as a finalist for his piano and violin suites. The young organist and composer has attended master classes with Jean Guillou, Ton Koopman, Ludger Lohmann and Skip Sempé. Lukas is gaining recognition for his colourful and passionate musicality. In addition to his concert tours, Lukas has appeared as choirmaster and arranger of transcriptions for organ. A Portrait, which was released in the summer of 2019, is the title of his first solo CD with organ music by Bach, Liszt, Dupré and his own improvisations. In the following year he was named “rising star” by the Austrian newspaper Kleine Zeitung. With more than 80,000 followers on Facebook, Instagram, YouTube and Twitter, he is one of the world’s most successful organists on social media.